I've been reading Colleen Mondor's blog for awhile and her book sounded interesting. Then I saw that one of my libraries had bought it, so I put it on hold. And here we are.

The Map of My Dead Pilots is an account of the author's years working at an Alaskan aviation company. It's a fascinating book, lying somewhere between a nonfiction essay--which is to say an fact-based narrative about Alaskan flying--and a memoir. Mondor places herself in the middle of the group, but she herself worked in Ops, not as a pilot. So she is at once involved and an observer. 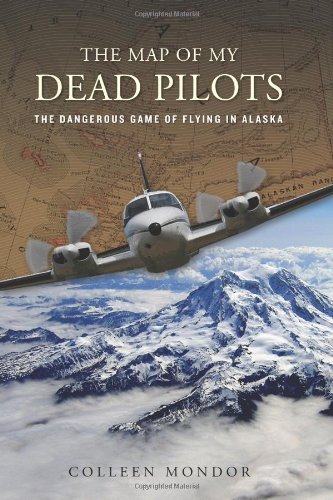 It's a book about flying in Alaska, with fascinating and horrifying details of the conditions and life. It's full of stories both funny and tragic. Sometimes these are the same stories.

She also weaves the different stories together, particularly the deaths of her friends Luke and Bryce, and the end of her father's life. The book begins with the statement that Bryce's death changed everything for those working at the Company, but it's only slowly that the details of Bryce's death are revealed. And throughout the book, Mondor grapples with the why of these three main events. Why did Luke die? Why did Bryce? Why did her father? It's a book about searching for impossible answers.

It's also about the stories we tell ourselves. In one chapter, Mondor gives several possible versions of Bryce's death as created by one of his fellow pilots. Each one is a cohesive narrative, each one emphasizes a different side of the possibilities, gives a different answer to the why. None of them are wrong, but none of them can be said to be true either. The group cannot answer the why of Bryce's death, but they can create their own narratives and they can create them as a group.

Because of all of this, I was left with an unsettling feeling of wondering, not exactly how much of this book is true, but how much is seen through a lens. This is, of course, true of all books, fiction and non-fiction, but Mondor seems to invite this question, to require it, almost.

It's strongly narrative as, I would argue, most good fiction is, but never loses sight of fact that these are real people whose lives have been changed and altered by the experience.

I did wish that we had returned to the Alaskan part just at the very end, but that's a very minor complaint. All in all, this is one of the best non-fiction books I've ever read and I highly recommend it to anyone who's interested in the subject, or just in stories and how we tell them. One minor caveat: there is a lot of swearing. I'm able to read past most of it, but I know others aren't.

Book source: public library
Book information: Lyons Press, 2011; non-fiction, adult but could be a great cross-over for the right teen


Mother Reader's review, with an interview and links
Tweet