The Shadow Behind the Stars 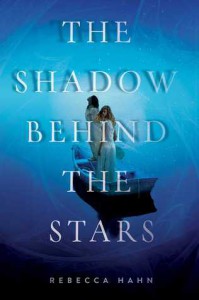 I read Hahn’s debut, A Creature of Midnight, last year and appreciated a lot about it, while also feeling ultimately slightly detached from the story. So I was interested to see how her second book, The Shadow Behind the Stars, would play out. I thought it was excellent and showed Hahn’s strengths and growth as a writer.

The Shadow Behind the Stars is narrated by Chloe, the youngest of the three sisters known as the Fates. Well. Sort of the youngest; all three were born at the same moment, but they show themselves to others, and to a certain degree see the world, as different ages of women. One of the questions the book teases out is the degree to which the Fates themselves are fated–must Chloe be rash and impulsive? Does Serena find herself drawn to children because she truly loves them, or because it is the slot she fits into? I found the treatment of this aspect really interesting and well done.

I noticed how much of A Creature of Moonlight was focused on women’s stories and friendship, and this is definitely the case in this book as well. The sisters’ relationships to each other and Aglaia form the heart of the book, and even when they venture into the wider world, many of the people they actually interact with are women. It’s not that men are completely absent, but the weight of the story is on female experience and voices, which I found very refreshing!

It’s also a story of change, of choices that both humans and the Fates make. Aglaia, the human girl who arrives at their doorstep, forces them to step outside their mostly-comfortable routine (we get hints that things are not quite as smooth as they immediately seem, and later these hints are explained a bit more). I liked the way her humanness was portrayed–sometimes in books where non-humans interact with humans, it can be hard to tell the difference, but here we see Aglaia’s impulsiveness, passion, and stubbornness through Chloe’s eyes.

And Chloe herself is a great character. She’s not exactly an unreliable narrator, but because the story is told in first person narration through her perspective, I kept remembering that everything is filtered through her. She has authority; she’s much older than she looks, and she is after all one of the Fates. But she also has things that she won’t admit even to herself, and part of her journey in the book is coming to terms with this, letting herself admit that the things which happen hurt.

There are definitely sad things that happen in the course of this story, but I felt like, appropriately for this story, they had weight and meaning. (I may have cried a bit.) (Also Monster, why.) I am struggling to decide exactly how I feel about the ending, which I won’t spoil so I can’t just say what I’m trying to tease out. But I think there is a difference between doing something because it’s what you’ve always done and doing it because you mean to.

All in all, this was one I was impressed by–I didn’t even mention Hahn’s prose, which is lovely!–and also moved by. It’s definitely one for readers who like quieter, character driven stories, especially retellings of myths and folktales.

I read this book for the Cybils, but this review is my personal opinion.