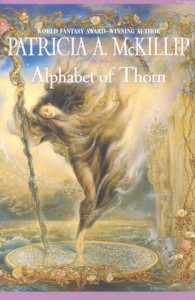 As far as I can tell, I first read Alphabet of Thorn in 2009. At that point I said, “This is one of McKillip’s strongest books, with a lot of palace intrigue and politics, fascinating characters, and a feeling of strangeness lurking just around the corner.” I do think it’s one of her stronger books, and one that holds up to re-reading, although its strengths surprised me.

Alphabet of Thorn has four point of view characters from the kingdom of Raine, each with their own chapters: Nepenthe, Bourne, Vevay, and Tessera. There is also the book which Nepenthe translates, the Alphabet of Thorn itself, which tells another narrative, from another time and place. At first the connection between these two narratives, the layers of story, is felt rather than said. Images and thoughts are repeated in one or the other, but we are not told what exactly they mean; there’s a kind of poetic tension in the breaks between chapters, like the break between stanzas.

Although we do have four points of view, we begin with Nepenthe, and she is the most obvious main character. She is an orphan, left on a cliff and brought up by the royal librarians who called her Nepenthe because they had gotten to the letter N. When Tessera, the new queen of Raine, is crowned, and Nepenthe ends up with a book written in an alphabet of thorn, the narrative begins. The story is set against a time of change, both outwardly on the political stage as Tessera struggles to truly become queen and the country faces turmoil on several fronts, and inwardly in the hearts of the main characters–especially Nepenthe, Bourne, and Tessera.

There’s a thread running throughout this book of recognition. Hearts meet and know each other, not once but several times. People recognize power, recognize magic. And on the other hand, they are hidden from each other; Kane hides her true self and name so successfully that the person she was is utterly forgotten; Vevay and Tessera can’t see each other clearly; Laidley insists on seeing Nepenthe as she isn’t. Nepenthe’s real name is lost, and so is Kane’s; their stories resonate with each other. Those who are supposed to see, do so instantly; those who don’t understand the truth miss it even though it’s in plain sight.

Another thread is the idea of history and myth as opposed to reality. This is clearest in the story of Axis and Kane, which is told as Nepenthe translates it. There are many myths of Axis and Kane, and they are all wrong. We, along with Nepenthe, are given the true story and with it the personal rather than political history. If I have a criticism of the book, it lies here: Axis and Kane leave so much destruction in their wake, and yet none of it matters to the story. We are supposed to sympathise with them–especially Kane–and I did, and yet I couldn’t help thinking of this part as the equivalent of the innocent bystanders in superhero movies.

But there is also Mermion, the first king of Raine, who is supposed to be not dead but merely sleeping in his tomb in the cliffs under the castle. When he is needed, he will wake. And he does wake, in the early days of Tessera’s reign, except that the legends got it all wrong: Mermion was the first queen of Raine. I could see this not working in other circumstances, but it echoes Kane’s hidden identity and gender, and I also felt that it was making a point about assumptions which did work for me.

Nepenthe is central to the story, but on this read through, I found myself noticing Tessera. At first she’s shown as a cipher, a timid girl who can’t quite take up the mantle of royalty that her father left behind. But as the story goes on, it becomes clear that she has quiet, stubborn strength. And in fact, the scenes when she is in the wood are some of my favorites in the book now. The way she interacts with the brambles and thorns and the way McKillip uses them as a metaphor for her stubborn strength is so lovely (and oddly, heart-achingly evocative of “The Subtle Briar” from Rose Under Fire).

I love stories where people who are overlooked end up being the key, and this is perhaps doubly true in Alphabet of Thorn. Tessera, “who understood small, unnoticed, powerful things” and Nepenthe, who lives in the depths of the cliff, but who is the axis of the whole story, are both characters for whom power is an uneasy thing but who wield it well precisely because of that.

For me, at least on this read, the pacing of the story seemed slightly off. The ending is a little abrupt, although I love Kane’s choice which feels both inevitable and right. And it circles back to the thread of names and identities; the fact that for her whole life, her identity has been defined by Axis and that the turning point of the story is her making a choice about who she wants to be. But after that, the resolution felt a little hasty and over-simplified, although satisfying from a personal point of view.

I will also note that there are a number of women in this story. Four of the six major characters, counting Axis and Kane, are women, and their relationships to each other are not only central but the driving force of the whole story. While Bourne, Laidley, and Felan are all present, they seemed to me (with the possible exception of Bourne) more muted and less complex than the female characters.

Finally, I will note that Nepenthe, who has brown skin, black hair, and changeable eyes–either green or brown–is described as a person of color, although the geography of the world in the book is too distant from ours to say if she’s meant to be from a particular culture or place (I was getting vague echoes of Egypt but I’m not at all sure this is right). Sadly, it appears that Kinuko Craft’s otherwise gorgeous cover severely whitewashes Nepenthe, and presumably Kane as well.

In the end, I found Alphabet of Thorn to be a rich book, densely packed and yet intensely personal. I loved Nepenthe and Tessera, and the way the threats of danger were in a certain way turned inside out. The writing and language are really beautiful in this one, and I’m grateful to have read it again.