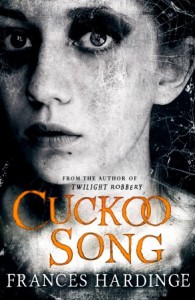 Frances Hardinge is undoubtedly one of my favorite writers and has the page to prove it. Every time I read one of her books, I know it will be a wonderful experience. Part of that is the originality of the stories she writes–I have a hard time coming up with readalikes for her books because each of them is so unique.

So, when I heard that she had a new book coming out this year (UK only, I bought it through Book Depository), I was naturally very excited. I pre-ordered it sight unseen because, well, new Frances Hardinge!

I am happy to report that Cuckoo Song more than lived up to my expectations and is, in fact, at the top of my Favorite Frances Hardinge Books list, jostling Lost Conspiracy/Gullstruck Island for first. It’s a wonderful, eerie story, with a lot to say about identity and family. Fresh, unexpected, and wonderfully written, this is a book for both the die-hard fan and a good entrance for the new one.

This, like several of my other favorite books, is one that I struggle with describing, because part of its joy is the joy of discovery, finding out along with the characters what is happening. In this case, I will say that Cuckoo Song is the story of a young girl called Triss, who wakes up after an accident to find that everything is wrong. There are gaps in her memory, and her sister seems to hate her even more than usual. And she’s filled with a ravenous hunger that she cannot manage to stop, no matter how much she eats.

What follows starts off as a gloriously eerie, nightmarish story, as Triss struggles to make her memories match up, to find out what happened to her, and why strange things keep happening. Hardinge is really, really good at writing the just-barely-wrong details, the mirror world that doesn’t quite reflect true.

But things don’t end there. (I’m struggling to write this part without spoilers; even though I guessed the solution fairly early, I don’t want to ruin it for anyone else.) Instead of leaving us with a big revelation, Hardinge writes beyond that, turning the story into a beautiful examination of identity, of family and forgiveness, love and second-chances at life. The story is also set between the two World Wars, and there’s quite a bit about the memory of the Great War and the losses that people have suffered as a result; it haunts the story and underlies a number of choices made by the characters. And, as I’ve said before, I want more people to write like Hardinge does–great children’s books which are also aware of history, of politics and the implications of both. As in The Lost Conspiracy and the Mosca Mye books, Hardinge does not shy away from big questions, in this case about grief, loss, and the decisions people make.

Triss is a fantastic character, prickly and vulnerable, wrong and absolutely right. I loved the way Hardinge plays with the nuances of who she is, and who she chooses to be. Moreover, I loved the way her relationship with Pen develops, and the wonderful bittersweet hope of the ending.

I think this is the scariest of Hardinge’s books–the first quarter is one of those nightmare situations that when written well is incredibly terrifying–and yet, like The Lost Conspiracy, there are mostly not villains so much as people doing the wrong things for the right reasons. Against this is arrayed the strength of friendship, of sisterhood, of making a different choice than the ones you’re presented with. Ultimately I found it utterly compelling and beautifully written, and–as I’ve come to expect from Hardinge–a subtle, surprising look at the world and how we make ourselves in it.

Book source: bought through Book Depository (tragically not available in the US except as an ebook)
Book information: 2014, Pan Macmillan; upper middle grade/YA (Triss is eleven)
_______________________
Favorite Author page for Frances Hardinge