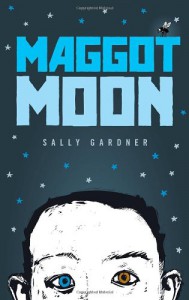 I’ll be quite honest–I mostly read this one because it’s on the Printz Blog’s longlist. While I normally like after-the-war stories, something about this one turned me off. I think it’s partly that the contrast between the setting and the Technicolor land is too great–1950s-60s America was not all Coca-Cola and Lucille Ball, and I felt like setting up that false dichotomy really messed up the rest of the book for me. Also, I didn’t understand why Croca-Cola? A misreading on Standish’s part? An attempt to set the world apart from ours? I think overall, it was just a bunch of little cracks in the windshield that added up to me feeling disconnected from the story and like I couldn’t trust it.