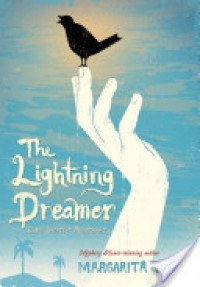 My reaction to this book is a bit complicated. First, we have my bias against a lot of modern blank verse which usually (in my oh so humble opinion) fails to justify its existence as poetry. Second, we have the fact that I’ve never felt that Engle’s poetry has done a lot for me personally. The Lightning Dreamerhad that working against it from the beginning.

In The Lighting Dreamer, we meet a young Cuban girl, Gertrudis Gómez de Avellaneda, who through most of the book is referred to by her nickname, Tula. She is a dreamer and a poet, usually in conflict with her mother who wishes for a docile and respectable daughter. When she begins to read the work of a banned abolitionist, her soul catches fire and she begins to write about slavery and injustice.

This is obviously a really important story about a place and people who are often overlooked. I knew nothing about Cuba’s abolitionist movement, let alone Tula. Obviously, this is a failing, and The Lightning Dreamer addresses an important lack of books on this subject for younger readers. I would like to read a good biography of Avellaneda, because she sounds like a fascinating person in her own right.

So that is all to the good. However, as I hinted above, I had real problems with most of the poems. The only one I really loved was an early poem about her father’s death. Partly, I really didn’t see that the form was justified by the writing. Although poetry is sometimes described as lines-that-don’t-go-all-the-way-across, few poets would (I think) actually argue that’s the case. Poetry, whether it’s written for children or not, does have a different quality to it than prose. The poems here failed to deliver on that promise.

Moreover, the poems are in the voices of different characters, from Tula to her family and her family’s cook. And yet, all of the separate voices–people of varying backgrounds and ages–read as exactly the same. Is Tula speaking, or is it her brother? The only distinction is the name at the top and what the person is concerned with.

Also, the characters seemed oddly flat and one-note. Tula wants to be free, she wants to write, she burns against injustice. Her brother loves his sister but worries about her activities. Her mother can’t understand how she produced such a willful daughter and worries that she will never be respectable and therefore never happy. In poem after poem, we only see the most simplistic version of the speaker. There’s a chance for real depth in what I understood of the family background, but it’s passed over in favor of a heavy-handed message.

In the end, I worry that I am missing something and not being fair to this book. And I am glad that it exists. I hope it sparks some interest in the subject. For me, however, it did not work, except as a gateway into history I previously didn’t know about. That’s something, but considering what could have been, it’s not enough.