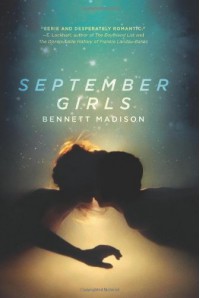 This post is perhaps a little different from my usual reviews. That’s because it’s essentially a comment for the SLJ’s Printz Blog which, for some reason, I was having trouble articulating over there. Also, since that blog has all the spoilers, this post will too. Don’t keep reading if you don’t want to be spoiled.

Starting out with disclosure: I stopped reading this book partway through. I wasn’t completely engrossed in it, and I was to finish before the Cybils started and it just didn’t happen. So I set it down for a while–most of a month, actually–which means that my reading experience was a somewhat disjointed one. When I started reading again, I actually finished the book in very short order.

More disclosure: while I appreciate books like this one, or Margo Lanagan’sBrides of Rollrock Island–the, emm, dark and terrible ones, maybe?–there isn’t one which I can remember that was really a heart book for me. I don’t tend to love and champion them.

So, all of that out of the way, what about the actual criteria? In terms of voice and characterization, this one shines. Karyn talks about this in her post and really nails it. Madison is doing fascinating things with voice, as Karyn notes: “Then we’ve got Kristle and DeeDee, and this is almost a perfect inversion (mirroring? Mirrors, after all, are a recurring and important image here) of Sam’s voice. With Sam, we have one person with two voices. With Kristle and DeeDee, we have two people with one voice, or so they say; neither one really introduces herself in her passages, and they say, often, that they are all the same.” I would say that mirroring is definitely the right word here.

And the thing is, that device is subtle and complex all on its own, but then you take into account what that device says about the wider themes of gender, and it is really really neat. (Sam has this rich interior life, but the one he has to show to the world through his dialogue-voice, which is the one he uses in relationship to other people and whenever he thinks about his best male friend, is totally built around these cultural definitions of what it is to be male. On the other hand, the Girls literally have no I through most of the book; they are judged by each other, lumped together both by the other characters, and by themselves.)

The classic YA theme of discovery and definition identity is also in play here. It’s most obvious in the Girls thread (using thread rather than narration here, because it jumps across both narratives), literally going from ‘we’ to ‘I’, seeing your true self in the mirror, changing your relationship to your parents–it’s not subtle, but it’s very effective. And at the end, for DeeDee, even Sam’s conception of her, the girl he in a sense created, is not so much being rejected as shed, like a used snake skin. At the same time, this theme is present in basically all of the characters’ threads. It’s kind of the point of the beach in this book, isn’t it? What happens there during the summer changes you. Think about Jeff, who at the beginning is basically the the definition of smarmy jerkdom, and who by the end can love Kristle and lose her and be better for it.

There’s also a quiet use of the Little Mermaid, both the original and the Disney version, as Karyn notes, which is really well done. It could easily have been over-the-top, but instead it adds a richness and complexity to the story. (The fact that the karaoke bar is named Ursula’s, for instance. It’s not pointed up at all, just there for the reader to pick up on.)

Are there faults? Sure, a few. I agree completely that Sam’s mother is drawn in too-broad strokes, in a way that is unfortunate and doesn’t fit well with the rest of the book. But overall, it’s clearly a very rich, strong book. Head-wise, I can completely see why someone would love it. I wouldn’t be upset if it got a shiny sticker (though I’d rather have silver).

Heart-wise, it’s more complicated. Most of the way through the book, I felt this undercurrent of unease, because of the way the narratives are positioned, because even though we’re given the Girls’ words, they’re always filtered through Sam. Because Sam acts as a magical force, though a mostly likeable and self-deprecating one. I wondered if the book was undercutting what it was attempting to say. By the end of the book, these concerns were largely gone, because of the resolution for Kristle (which was beautiful and I got all choked up) and for DeeDee. Still, in my sense of the book as a whole, part of that feeling of unease lingers, although I don’t have a clear enough sense of why to articulate it. So, for me, I can totally get behind this one when we’re talking about the structure, the narrative and form, the voice and characters, even the themes. But despite that, it’s not one that truly touched me in the way I wanted it to.