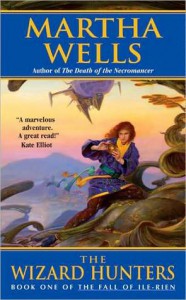 Once again, Martha Wells shows that she knows how to start a book. Here’s the opening of The Wizard Hunters: “It was nine o’clock at night and Tremaine was trying to find a way to kill herself that would bring in a verdict of natural causes in court, when someone banged on the door.” Can you read that and not want to know what happens next?

The Wizard Hunters is the third Ile-Rien book, and the start of a trilogy within the series. (The front cover of the copy I read calls it “The Fall of Ile-Rien” which sounds extremely dire.) It takes place about a generation after the end of Death of the Necromancer. I’m not going to give you hints about what happens to the characters from Necromancer, except to say that Tremaine’s last name is Valiarde, and that she’s very much alone.

As the book begins, we find ourselves in Vienne, in the middle of a war which looks and feels very much like our WWII. One of the things I truly admire about the Ile-Rien books in particular is the way that Wells has managed to capture the feel of an era in our history without appropriating the specifics. That is, Necromancer has the feel of late 19th/early 20th century Paris, but I never thought that any of the characters were simply, say, Renoir or Debussey in disguise. The world that she creates is quite distinct from ours, and yet the details are clear enough to evoke a time and chronology.

Anyway, what we get in Wizard Hunters is the feeling of sheer terror and helplessness–Ile-Rien is fighting for its life against an enemy who can neutralise most of its weapons and whose bases cannot be found. It is taken as a given by most of the characters for most of the book that Ile-Rien will lose.

Tremaine has certainly been affected by this war, both as a citizen of Ile-Rien and personally. But her response to it, the way it makes up part of her motivations but not all, is a complicated thing. I liked this feeling of complexity very much–to me it gave a level of reality to her character that would be missing if she were simply gung-ho and doing her bit. She does do her bit, but for very different reasons than that. Also, I just like her: she’s prickly, stubborn, flawed, and yet completely engaging.

But there’s also another world and another main character. Ilias and his people have fought against wizards and their curses for years, suffering especially under the devious Ixion. Now there are signs that Ixion has returned. For Ilias and his family, this is especially personal for reasons which I will not spoil for you. Ilias’s world* is almost as different from Ile-Rien as it could be: agrarian, non-technological. I will be interested to see how Wells handles the difference between the two; I will also admit that I’m a bit nervous because this narrative is so easy to mess up. However, Wells is a great writer, so I have faith in her. Plus, for me as a reader (I am emphasizing this because I think other readers could have quite different and also valid biases and reactions) real specificity of character and world does a lot to counter unfortunate tropes. And Ilias and his world are certainly treated with care–the society he lives in is better in some ways than Ile-Rien, worse in others, and in still others it is simply different.

So, I liked this one a lot and am totally on board for the next book. The story does not end on a true cliffhanger, but things are not exactly resolved either. Besides, I want to know more about Tremaine’s past, and her motivations.

* I have totally forgotten how to spell it, and have returned the book. Smyrnia? Something like that? Bother.