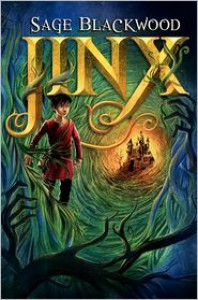 To be honest, I don’t quite know how to write this review, because what I really want to do is reach through the screen, grab you, and say, “YOU! Read this book! Now!” But here are the reasons I loved this book.

1. Jinx. I totally believed in Jinx, in both his strengths and weaknesses. He’s relentlessly curious, kind, and full of wonder. A marvelous, marvelous main character.

2. Everyone else. Simon and Sophie especially–in my head they’re TOTALLY related to Howl and Sophie–but Reven and Elfwyn too, and Dame Glammer. Even the Bonemaster is fascinating.

3. The setting. I love it more than I can say when settings feel like characters in their own right, and that’s absolutely the case here. The Urwald is every fairy tale forest, but it’s its own place as well. Both the Urwald and Samara had a wonderful texture to them.

4. The way Jinx both uses fairy tale tropes and plays with them. In the end, the story is fresh and original, but the way Blackwood weaves in the images and language of fairy tales, without calling on any one specifically, adds a layer of depth that would otherwise be missing.

5. The magic. It’s thought through–in fact, I found it one of the best systems of magic I’ve come across in some time. It’s not lazy, which I hugely appreciated. In short, I was both convinced and enchanted by it, and by the way the magic of the Urwald itself interacted. And the way Jinx’s particular perception of the world works–it’s a lovely concept and it’s done in a really neat way.

6. This whole book is about finding your way in a world that’s difficult, that isn’t always obvious. It’s about who to trust and why, and listening to your heart–not in a cheesy way, but practically and meaningfully.

7. The writing. It’s deft, assured, full of great dialogue. I’m trying to pick out a particular passage to quote and can’t find one, because the whole thing is so strong. This is not watered down in the slightest, but it’s not self-consciously literary either. Here’s just a tiny taste: “He stared around in wonder. Above the workbench were shelves with jars, bottles, and boxes. Stacked in between them were more piles of books–mostly leather bound, some of them scaly. Jinx thought they might be bound in dragonskin. It all looked exactly as a wizard’s workroom ought to look, and Jinx could feel magic dripping all over everything.”

In short, the only thing I wanted from this book was more, and I’ll get that since it’s the first in a series (more Sophie, please! Sophie is awesome!). Highly, highlyrecommended for fans of Diana Wynne Jones, Megan Whalen Turner, and Frances Hardinge–or, you know, ANYONE.