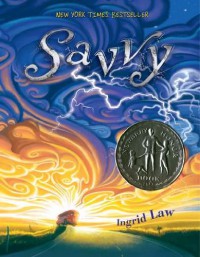 Mississippi Beaumont, commonly known as Mibs, is about to turn thirteen. Normally thirteen is just another birthday. But for the Beaumont family thirteen marks the day their savvy kicks in. Mibs is looking forward to her day. A little nervously, given that her brother Fish started a hurricane and forced the whole family to move to Kansaska-Nebransas (the Kansas/Nebraska border). But just before her birthday, her Poppa is in an accident and everything changes.

Determined to make it to him, she sets off on a pink Heartland Bible Supply bus with an assortment of siblings, friends, not-so-much friends, and passersby.

I LOVED this book. Mibs' voice was so fresh and true and while every character is a little out there, none of them felt like caricatures. And the writing just sparkled. I opened the book to a random page and found this bit:

Before leaving the bathroom, I cheerfully added a paper-wrapped soap to the pocket of my dress that still held Will's birthday present pen. Then I joined the others and we all flop-flapped down the hall in our new Mega Mega Mart flip-flops, following Lill and Lester downstairs toward the Heartland Bible Supply bus like a gaggle of flat-footed goslings, keeping a lookout for any unwanted attention.

I also liked how Mibs seems to find church and faith genuinely important. It didn't feel forced in any way--it simply seemed like part of her character. She did seem older than thirteen to me. But I decided that in a way that fits--the oddness of the Beaumont lifestyle would probably make her older than most thirteen year olds.

Ingrid Law has a new book out next year called Scumble which looks like it will be a sequel to Savvy.