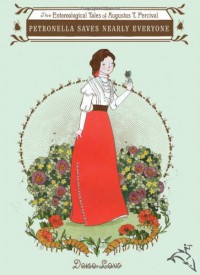 I really, really wanted to like this book. Really, really. And it was fun. A light, sparkling romp through English country houses and London, complete with spunky heroine and bug-eating uncle. I did appreciate that Petronella was spunky but also very concerned with society’s rules (at least at the beginning) and very interested in clothes. Because, honestly, most of us are somewhat concerned with society’s rules and interested in clothes. So she rang a little more true as a girl of her times (Late Victorian/Early Edwardian?) than many other historical fiction novels, where the heroine seems intent on proving just how much she hates society’s rules and has a mind above material things. The mystery itself was interesting, with enough gravity to it that the fact that they were running all over London trying to solve it didn’t seem quite so silly as it might have otherwise.

I hate to say this. Unfortunately, two things detracted from the story for me. The first were some of the phrases Petronella used (it’s narrated in first person from her point of view). They just clunked. It was the same problem I’ve had with several of the Lady Emily Ashton mysteries–clearly they were meant to convey a sense of historicity. That is, they were meant to create the illusion that the book was actually written at the time it’s set. However, I am willing to swear that these particular phrases had never been seriously uttered or written by anyone since the early 19th century. So, the gambit to make me believe in the historical aspect of the book didn’t work.

The other problem I had was James. At first I liked the idea that she already had a secret crush on him and knew it, so her central journey wasn’t finding out that *gasp* she likes him. However, again, the description just grated on my nerves after about forty pages. It seemed like an average of once a page Petronella was gazing longing at him, detailing his adorable smile or great muscles or beautiful hair. It all got to be a bit much and *cough* like a certain series I could name but won’t. In the end, I didn’t believe in James as a character. Even worse, the fact that she would stop in the middle of an important investigation to stare longingly at him kept me from completely buying Petronella as an investigator.

Ultimate verdict? Very good premise with a shaky execution. If you’re in the mood for something light and humorous, it might be worth giving it a try.