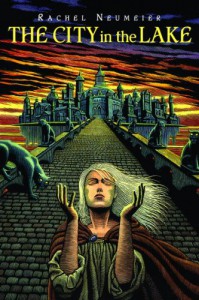 There is a City which is built on a Lake. And “At the moment between sunset and dark, the wind off the Lake sometimes dies and the air becomes utterly still. If that pause lasts long enough, it is said, the water becomes a mirror in which a man may see his true face reflected, as well as the reflection of the eternal City.” The City is the heart of the Kingdom. The King is the heart of the City. The Prince is the heart of the King. And the Prince disappears, leaving his father and his older, illegitimate, brother to search for him.

This was a lovely story, with a very understated style which was incredibly vivid at the same time. I loved the mirroring of the cities, which keeps getting more complex as I think about it. It reminded me in places of Robin McKinley, and in other places of Patricia McKillip, and in other places of The Winter Prince (actually the parallels there are somewhat striking when I stop to think about them). This is a good thing in all cases.

Although I enjoyed the writing, it was the characters I really loved. I didn’t expect to be quite so moved, but I love stories that talk about family, and this one certainly did so in a very powerful way. And for me, Neill was not only compelling but likeable. I liked that Timou’s quest was to find her father, and that in order to do so she had to turn her back on love.

All in all, this was a book that I savored and that I’ll definitely be trying to add to my personal library.