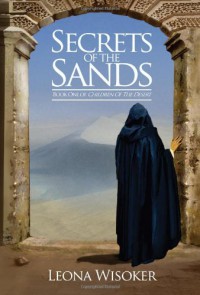 Opening: Hee-ay, hee-ay: the cry of the water-seller in the broad and the narrow places; shass-shass-shass, the warning signal to clear a road for noble blood, be it one or many together...To Idisio's sensitive ears, the cacophony wove a melodic pattern that steered him, unerringly, to the best possible target.

Secrets of the Sands is a richly textured fantasy, weaving together the narratives of three main characters, Idisio, Cafad Scratha, and Lady Alyea. The world it inhabits feels full, with political intrigues, geographic and historical splits, divisions between classes.

I picked this book up after seeing that Tamora Pierce recommended it and really, really enjoyed it. (Which makes Pierce two for two on her recommendations--The City in the Lake was one of hers as well.) There was nothing outstandingly original about it, but the characters were both fun and sympathetic, and the whole story seemed very solid. I never found myself rolling my eyes, or thinking, "Oh, come on," which makes for a nice change. And the worldbuilding, which is pretty much always important to me, seemed to be not just good, but effortless.

I especially enjoyed seeing the contrasts between the different cultures, that at court and that of the desert lords, and the way all three main characters have to chart a tricky course somewhere between the two. It's also a good old fashioned coming-into-power story, with all of the testing and training that implies. While sometimes multiple character narration doesn't work for me, here the fact that it was actually limited third person helped to make the whole story cohesive. And the background of the characters (Idisio is a street thief, Cafad a desert lord, and Alyea a court lady) gave a different flavor and insight into the events.

All in all, this was an extremely enjoyable fantasy, combining known elements, but with a special flavor that kept it from feeling boring or derivative. I found it compelling and readable. There's apparently a sequel, which I want to get a hold of.