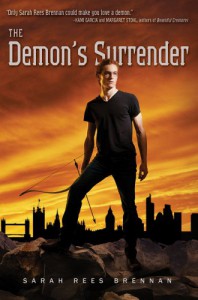 Opening: "Magic was like a special guest in Sin's life. It appeared all too rarely, stayed for a brief interval and she spent the rest of her time preparing for it to come again."

I'm going to preface this by saying that I totally understand if someone out there decides not to read this series. I felt like I was taking a chance when I first read them, but I'm glad I did. These books are not only good, as in well-written, they're also good, in a less tangible but very real sense. They touched me deeply and I'm happy to be a fan.

Also! Consider this your warning: I will do my best to not spoil this book, but I will not attempt to remove spoilers for the first two. Proceed at your own risk!

This is the third book in a trilogy, which is always nerve-wracking. Will everything end well? Will my favorite bookselling liar make it out okay? Adding to the tension is the fact that the series has switched point of view for every book, meaning that we have a whole new narrator.

That narrator is Sin, also known as Cynthia and Thea. Daughter of the Market and someone who's both born to perform, and who works at it. I pretty much fell in love with her. I don't know exactly why--other than being oldest children we don't have an obvious commonality. But that doesn't matter, because Sin is awesome. I loved seeing the world through her eyes; she has this incredible awareness of physicality, of movement and its effects. And she is neither perfect, nor is she incredibly messed up, despite having had really hard things happen to her. I appreciated this.

(Now, this is not to say that I don't still love Mae. Tiny people have to stick together! In fact, if I had a complaint about this book, it would be that seeing things from Sin's perspective means that the Crawfords are a lot more distanced than in the first two books. Nonetheless, Sin and Mae have some awesome interactions, and at one point I muttered, "Oh, just admit you're supposed to be best friends already.")

Going into this book, I expected to cry many buckets of tears, because that's what happened to me after reading the second (there was SOBBING, people). But even though some awful things happen, I felt like this was a happy book. I think there are reasons--good reasons--for a certain plotline resolving as early as it did, thought it meant that after one of the happy moment I thought, "THIS IS ALL VERY NICE, but I am ANXIOUS. There is far too much book left!" And I was right to be anxious, because immediately afterward something very very bad happened and I hyperventilated for awhile. Still, I only cried twice. I'm not complaining about this, understand, and I'm not saying that I wasn't fully emotionally invested in the story. There were any number of moments where I thought, "Oh, my poor [fill in any character's name]!" and wanted to give them a hug or a chocolate cookie or something. But my expectations as far as tone were a bit different than the reality. Once I adjusted, I loved it completely, and I'll will happily be re-reading for ages (can't wait to actually read all three at once!).

I will say this on the subject of relationships: I've been super annoyed with a lot of books lately because it's like a girl and boy see each other for the first time and it's instant attraction! And nothing ever happens to really challenge that, and there's no other reason given for them to be together besides this mysterious chemistry. (And usually the boy has some unusual physical feature that the girl goes on and on about.) Sarah Rees Brennan has completely reversed that trope. Her crazy handsome guy? He's not human. He will not be loving you back, unless you're Alan or a Crawford, in which case he will try, but he will do it very badly. And all the real relationships in these books are either between family members, or else hard-fought ones built on understanding and the willingness to talk about actual problems you have. I think it's fantastic, and it's the reason I bought as many of the pairings as I did (even to switching ships during the third book, which never happens).

And I love the way Brennan treats the Issues in these books. Alan, Sin, and Jamie all deal with really big things, and they confront them head-on. They're defined by them, but they're not limited by them. And Alan and Sin, at least, occasionally get things wrong, reading the wrong meaning into gestures and looks. I don't deal with either of their issues, but I do know what it's like to get defensive about something before you need it, and it absolutely rings true that they would do this.

So now that I've written an essay, I'll just say that this book made me laugh and sniffle and smile and I was very satisfied by it. I'm still a huge Alan fangirl (I think I need a T-shirt that says, "Book in one hand, gun in the other"). I still think Mae is awesome, and Jamie hilarious, and Nick oddly heart-breaking. And I just want to be friends with Sin. Can this happen, please?