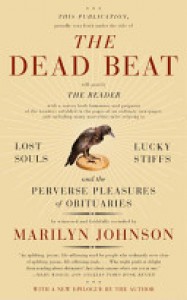 Opening: "People have been slipping out of this world in occupational clusters, I've noticed, for years. Four journalists passed their deadline one day, and their obits filled a whole corner of the paper."

So, I actually read--shock! amazement!--a non-fiction book. It had been languishing on my TBR list for ages, when a friend of mine who read it kept talking about how much she enjoyed it. I put a hold on it and today it arrived.

Johnson is one of the people who, when reading a newspaper, turns first to the obituary section. But in her case, she elevates the habit to a passion. Part apologia, part introduction to the wonderful world of obits, The Dead Beat is highly readable and very enjoyable.

The book skims through the history of the obituary, focusing mainly on the modern revival of the form, which Johnson sees as the best form of contemporary journalism available. It also includes sketches of the major players in the obituary world--famous writers and enthusiasts. According to Johnson, there is a British style, which aims to be intellectual and drily witty, while on the American side the recent focus has been on obituaries of everyday folks. She includes excerpts from the best of both.

There are, of course, many obituaries quoted. Some are funny, some touching, especially the chapters on the 9/11 and 7/7 terrorist attacks. Some are just plain quirky. One of my favorites was from the NYT: "Dr. [Alain] Bombard became an instant legend in France in 1952 when he drifted from the Canary Islands to Barbados in a small rubber boat. He joined a long list of Frenchmen who have performed seemingly silly feats at great hardship and, often, immense risk."

If this book has a fault, it's that it occasionally feels disorganized, with Johnson jumping from continent to continent, moving back and forth between times and people. In general it works, but occasionally it veers into confusion.

Still, this is a fascinating look into a vibrant subculture. It illuminated a part of life I previously knew nothing about, and manged to educate and amuse at the same time.