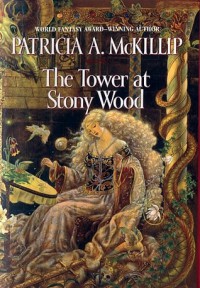 Opening line--"She saw the knight in the mirror at sunset."

The first time I read this, a few years ago, I remember expecting a re-telling of "The Lady of Shalott" and not getting it and being somewhat put off by this. On this re-read, I didn't have that expectation and therefore was able to just enjoy the story. And really, McKillip does a fantastic job. It's not a re-telling of "The Lady of Shalott" at all, except for a few little moments where it echoes Tennyson just slightly.

Mirrors are an important theme in the book, and they're also present in a more intangible way. Melanthos and the woman in the tower are mirrors, as are Cyan Dag and Thayne Ysse. Mirrors are shifty. They tell you something that you accept as true, but it's not quite. That's vital for this story.

A tripling of things is another key element. The three sisters, which are both mountains and women, the three women who watch in mirrors and stitch, the three men who fight, the three towers. It's interesting to note that McKillip is from Oregon, where there are three mountains called Three Sisters. While the description of the mountains in the book is quite different than the ones in Oregon, it made for an odd insight.

One of the moments when McKillip echoes Tennyson comes fairly early, when Melanthos is "watching the woman in another mirror within another tower. She saw lilies massed against the tower wall, a shallow river flowing past them, a road beyond the trees along the riverbank, and on the other side of the trees, furrowed fields beginning to flush green. A man rode through the mirror...Silver flared like the glance of light off armor."
Which begins to sound an awful lot like this:
"On either side the river lie
Long fields of barley and of rye,
That clothe the wold and meet the sky;
And thro' the field the road runs by
To many-tower'd Camelot;
And up and down the people go,
Gazing where the lilies blow
Round an island there below,
The island of Shalott."

And later:
"The sun came dazzling thro' the leaves,
And flamed upon the brazen greaves
Of bold Sir Lancelot."

The other moment where I really noticed the echo was much later. "Separating shadow and leaf and light as he rode beside it, he discovered the dark, worn crenellation of four towers joining four walls." In Tennyson, of course, we have "four grey walls and four grey towers/Over look a space of flowers/And the silent isle imbowers/The Lady of Shalott." There's a very important point to be made here, which is horribly spoilery, so skip the rest of this paragraph if you don't want to see the SPOILERS*. Okay, so the lady in the tower, the one that Cyan Dag has to save is the rough analogue of Tennyson's "Lady of Shalott," right? All of these descriptions, the curse that's put on her. But she's the one that's not real, that's a creation of Una's. So what does that say about McKillip reads Tennyson? END SPOILERS

I thought this was another book where McKillip really hit all the right notes. And with the richness of themes and devices, as well as the echoes of Tennyson, there's a lot to chew on here. In fact, this review is starting to sound a bit more like a college essay than anything else, albeit a very short and informal essay. As I think I've said before, when McKillip does it right she creates this dreaminess, where you feel almost as if you're drifting through the story while it's being woven around you, which works very well with what she's doing here.

*That looks like such a weird word when you type it in all caps.

My other McKillip reviews:
Something Rich and Strange and Ombria in Shadow
Riddle of Stars (Riddle-master trilogy)
Harrowing the Dragon
Song for the Basilisk
Official read-through index

The one re-read on this list, for the simple reason that I hardly remembered it and got so much more out of it this time. Although the story echoes “The Lady of Shalott” at times, it’s simply that: the barest echo of Tennyson. And there’s all sorts of symbolism that I can see but can’t quite grasp the meaning of, which is awesome, don’t get me wrong. Anyone who enjoys a thoughtful, dreamy fantasy should give this one a try. [2010 in books]
Tweet