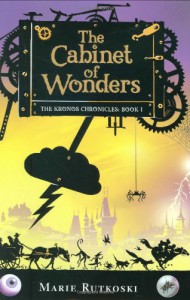 Opening line: “The yellow hills rose and fell in sunny tops and valleys.”

Petra Kronos’s father understands metal. Not only does he know which metal has the best memory (silver), but he can work with it using only his mind. But now he is in Prague building a wonderful clock for the Prince of Bohemia. After he returns, blinded, Petra sets out for Prague herself.

I started to read this book when it first came out and, I don’t know, it was the wrong day or I was in the wrong mood, or the stars weren’t aligned properly. It never quite clicked and so it languished in the bottom of my TBR basket until I had to return it to the library.

This time I slipped right into the story and ended by really liking it for a few different reasons.

First, Petra is fantastic. I liked the fact that she doesn’t go to get revenge, but rather to help her father. She’s also funny and smart, and she has a kind heart. She’s not perfect, but overall she’s a nice person.

The other characters are also great. I feel like I’ve been saying this a lot recently, but I’m still not quite sure what to make of most of them. Is the prince really evil? What about Jarek? I like this ambiguity, which makes the story more nuanced.

I have a bit of a thing about setting, and in general a minor complaint about some modern fantasy is that it seems like occasionally authors choose the setting to serve the story instead of letting the two work naturally together. I don’t have any such feeling here. Bohemia and Prague are lovingly drawn, part of the story from the beginning. (The Author’s Note in the back makes this clear, but it’s already apparent.)

I was confused about historical setting until we encountered John Dee, who I recognized from other books. Incidentally, the detail about Elizabeth’s portrait was both wonderful and absolutely chilling.

And I would be remiss if I didn’t mention Astrophil, who is certainly the most charming metal spider of my acquaintance. (I was going to say the most charming spider and then I remembered Charlotte. Sorry, Astrophil. Not even for you can I displace Charlotte.) He easily could have become cutesy or gimicky and I never felt like he did. I always had a sense of him as a character in his own right.

So, very well done, Marie Rutkoski. Next up: The Celestial Globe