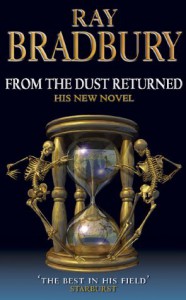 Opening: "In the attic where the rain touched the roof softly on spring days and where you could feel the mantle of snow outside, a few inches away, on December nights, A Thousand Times Great Grandmere existed. She did not live, nor was she eternally dead, she...existed."

Yesterday was Ray Bradbury's birthday, so it seems appropriate to review this today.

From the Dust Returned is the story, or rather, stories, of the Family. They do not all live in the big old House, but when the time is right they return there. And who are they? Whatever is strange, horrifying or eerie.

The book's structure is that of linked short stories, bound together by the House and by Timothy, the one member of the Family who is entirely usual. Because of this, it has an episodic feel, bits and pieces of tantalizing history, interspersed with some kind of Timothy-centric transition.

I had an odd reaction to this book. While I enjoyed the idea of it, I also found the prose extremely opaque. In general, I don't complain about poetic prose. I love the rhythm of a polished sentence. And yet, in this case, something about the finished-ness of it all kept me from entering into the story. It was like bouncing off a well-constructed wall. And so, despite the attractiveness of the idea, the execution left me feeling kept-away.

Now this might also because I found the lack of strong plotting a severe detriment. I do realize that this is a book essentially composed of short stories, but there's a sudden appearance of plot at the end, with the central tension between belief and lack of belief, which I found not so much unconvincing as uninteresting.

I realize I'm being pretty hard on this book, Partly, this is because it's Ray Bradbury, you know? He's supposed to be better than this. And partly it's that this book suffers from not simply being a collection of short stories. If it had just been that, I would have read much more happily. But it tries to be cohesive and doesn't quite get there, living unhappily somewhere in the middle.