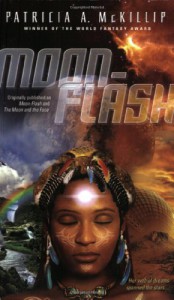 A sci-fi ish two book series by Patricia McKillip. Interesting but probably not my favorite books by her. [Dec. 2008]

This is a single book containing Moon-Flash and The Moon and the Face. I thought I had only read the first one, but it turned out that I had read the second as well! It’s a fascinating concept, which I can say nothing about because I will ruin the whole thing! [June 2010]
Tweet