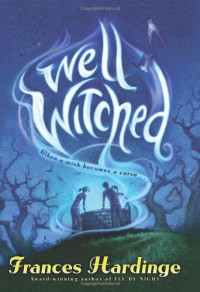 Opening: "For a wonderful moment Ryan thought Josh was going to make it."

Three friends, stuck in a forbidden place and desperate to get home. The only thing that might save them is the wishing well nearby--and the coins that lie at the bottom. But with the coins come the witch's anger and her punishment: fulfill the wishes, since she cannot.

This book was something of a surprise to me. It wasn't what I've come to expect from Frances Hardinge. In large part this is because of the setting, which is as near modern day England as you can get. Also, her main character is male. Because of this I was a bit taken aback at the beginning of the story.

In fact, if I wanted to compare this book to anything, I would say that it felt like both Diana Wynne Jones and Margaret Mahy, both in terms of setting and in the three-children-against-the-world theme. However, here the bond between the three is sorely tested (with good reason).

The thing is, Fly by Night and Fly Trap, and The Lost Conspiracy can hardly be compared to anything else. Hathin is in a certain category of heroine (like Sophie Hatter!) but there's an originality and freshness to those three books that I missed here. Did I like this book? Yes, of course! Hardinge is an excellent writer and I would probably read her story about burrowing gnats in a tree trunk. (Do gnats burrow? I don't know!) But I do prefer Mosca, and especially Hathin.

In terms of the story itself, I spent most of it wanting to shout at Ryan and Chelle because it was so apparent to me that Josh is awful and I wanted them to see it too. I'm not sure if that's a problem, or not. Younger readers might not have the same reaction. Besides that, it's a nice coming of age, with both Ryan and Chelle using unlikely gifts to save the day.

I think if there's a message here, it lies in the tension between the witch's powers, that are both wonderful and horrifying, and the actual gifts each person has. The powers amplify the more obvious attributes of the three friends--Ryan's clear-sightedness, Chelle's talkativeness, and Josh's energy. But it's not the obvious attributes that end up mattering. It's what lies in their hearts, to put it in rather spiritual terms.

I did feel that the portrayal of the Well Witch needed a smoother arc to make me really trust and believe in the ending. I wanted just a little hint of that before. But I do know how hard it is to get that kind of thing right, and after I finished I could see the progression a bit more clearly.

So, if you're a Frances Hardinge fan, by all means, read this! It's a nice story, with some excellent side characters. But do be aware that it's not Fly By Night, or the Lost Conspiracy. Its setting and characters are different, and the scope is smaller.

As a side note--do all Hardinge titles have jokes in them? Or at least double meanings? It seems to me that they do. (The US titles; I haven't noticed it as much in the UK versions.)