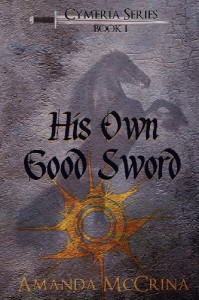 Opening: "In truth, he would rather not go to Vessy. He'd considered just sending a letter from the post-station at Chaelor. That would be the easiest thing, for himself and his father both."

About a month ago, Amanda McCrina contacted me to ask if I would be interested in reviewing her book, His Own Good Sword. The synopsis she sent along intrigued me, so I agreed. She very kindly sent me a print copy.

It's always a bit of a risk, agreeing to review a book. What if you don't really like it? It can be awkward to say how you actually feel, when you know the author is going to be reading. Thankfully, in this case I truly enjoyed the book and would definitely recommend it.

Tyren Risto is the second son of a noble family. He has just been given his first posting in the army, which sends him to the Outland, home of the rebellious Cesino tribes. Tyren, unlike most of the other noble young men, has a great deal of sympathy and respect for the Cesino; in fact, he owes his un-glamorous post to the fact that he stood up for one of them. While he is there, the border erupts with new rebellions and Tyren must decide where his future, and his honor, will lie.

First of all, I very much enjoyed the setting and time that are evoked. It's historical fantasy in the sense that this world is not ours, but it's very much drawn from Roman history, especially as seen through Rosemary Sutcliff. On the other hand, the Empire is not just Rome in a different guise, and the Cesino have their own culture and history.

I liked the tensions that the various characters, especially Tyren, must resolve. For Tyren, there is a question of upholding his family's honor versus his personal sense of right and wrong. He's also torn between the two parts of his heritage, the Cesino and the Empire. It's a difficulty that's going to be familiar to readers who tend to like the kind of books that I do (think Phaedro, or Gen, or Miles). An added layer of tension is the difficulty that Tyren and Torien, his father, have in seeing each other accurately. The real affection and respect between them gets clouded and that's something Tyren must deal with. I especially liked the way this theme was handled in this first book.

All in all, His Own Good Sword is a nice example of a coming of age story, a young man discovering who he really is and who or what he can really serve and still be at peace with himself. While there are a few clunky moments, I also found the writing smooth and in some places beautifully descriptive. If you have a chance to get a copy, I definitely recommend it!