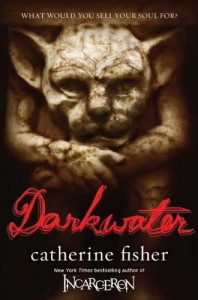 I've read several books by Catherine Fisher, including the Relic Master series and the Incarceron duology. I've had mixed reactions to her writing in the past. Generally, I have wanted to like them and loved the set up of place and character and world and so on, but felt like the end of the series tended to not fulfill my expectations.

Darkwater is a self-contained book, which I think helped it. We start in the 19th century with Sarah Trevelyn, last of the fallen Trevelyns, once lords of the manor and now trapped in squalor with their former servants. Sarah is spunky and bold, but also proud--one of the pivotal moments early in the book shows clearly that she makes what appear to be compassionate decisions, but that they are based on pride rather than care for her fellow humans.

Darkwater Hall is now owned by Lord Azrael, who won it from Sarah's grandfather in a card game. There is something not-quite-right about him, but when he offers Sarah a chance to come home, she makes a deal with him, despite the warnings of a mysterious tramp who seems to know more than he's telling.

Generally speaking, I liked Darkwater a LOT. Fisher manages to create a very ambiguous situation, drawing on traditional mythologies but doing it in a way that keeps things from becoming clear, rather than the opposite. In a subtle way, this puts us in Sarah's shoes. Who does she trust? Who does she believe in? She can't tell, and neither can we.

The setting is atmospheric and well drawn--the manor with secret passages and hidden rooms. The child of the manor returning to take charge of it again.

Now, when I had just finished the book, I was entirely satisfied with the solution. It had a nice symmetry to it--I don't know how to say it other than that it was satisfying. And then I thought about it a bit more, and I realized that I wanted more reasons for Simon's decision. As it stands, I had trouble with the way he makes his decision. And since that's kind of the linch-pin of the whole resolution, that's an issue. So chalk it up as one that was great when actually reading and then maybe more problematic later.

I think this is my favorite Catherine Fisher book so far, despite the wobbliness of the ending. Sarah, the almost claustrophobic setting, the deft use of symbolism and mythology--Fisher manages to boil her usual strengths down into something that reads as tight and masterful.