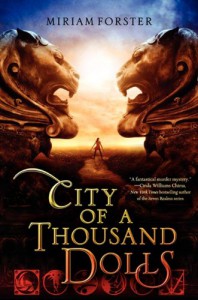 Nisha was abandoned at the gates of the City of a Thousand Dolls when she was just a child. Now sixteen, she lives on the grounds of the isolated estate, where orphan girls apprentice as musicians, healers, courtesans, and, if the rumors are true, assassins. Nisha makes her way as Matron’s assistant, her closest companions the mysterious cats that trail her shadow. Only when she begins a forbidden flirtation with the city’s handsome young courier does she let herself imagine a life outside the walls. Until one by one, girls around her start to die.

The disclosure that I have to make here is that I've been following Miriam Forster's blog for several years. At least since 2009, according to a quick search, but I had apparently been lurking before that. Regardless, I follow her blog and we occasionally chat on Twitter about how hard it is to eat oatmeal.

And you know how I work? When I read a book written by someone I know, it makes me really nervous. What if I don't enjoy it? What if it's downright bad? How can ever talk to them again?

Fortunately, in this case I had no problems. City of a Thousand Dolls is awesome, and just my cup of tea. Nisha is a great narrator, full of understandable questions about her own future, but also curious about the world and the mystery hidden inside the City. She is not the awesomest ever at everything, but she does have a special place within the different Houses.

And the worldbuilding is lovely. Without being an exact analogy, Nisha's world is based on Southeast Asia. There are lots of nice details about everyday life, but also about things with larger stakes, like the clothing the girls wear. How you present yourself is tied to who you align yourself with and, especially for the girls in the House of Beauty, you can literally send a message with your clothes. I loved that the details of the worldbuilding tied into the larger political struggles going on in the Empire.

Moreover, as a mystery fan I was happy with the way that strand unfolded. Nisha is overall a smart investigator, and although I guessed who the culprit was, I think that's more a function of having too many mysteries under my belt. And the way the denouement played out was unexpectedly moving.

I also appreciated the way Nisha's attitude towards romance changes during the story. At first I was not sure if I would be okay with this aspect at all, but in the end I thought the way my expectations were set up and then slowly eroded was pretty awesome. There are huge spoilers involved, so I can't go into much more detail than that, but I thought the treatment of that sub-plot was fresh and surprising.

There were a few moments where I thought the sentence level writing was a little clunky, but overall this was a very strong debut and one I wholeheartedly enjoyed. I'll definitely be reading the sequel.