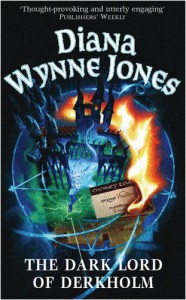 Note: Throughout June, I’ll be re-reading and reviewing books by Diana Wynne Jones. While I don’t think there are any huge spoilers below, I can’t swear that there are none, so tread with caution if that’s something you’re concerned about.

Dark Lord of Derkholm is the first of two books, with a sequel called Year of the Griffin. It’s one that I absolutely loved when I first read it, but which I haven’t re-read as often and which hasn’t gone in quite as deeply as some other DWJ books. I was curious to see what my reaction on re-reading it this time would be. As it turns out, I thoroughly enjoyed it and found that it’s really doing quite a few interesting things.

There’s a gentle prod at Tolkien and Tolkien-style fantasy. We could probably have guessed this from the title–Dark Lord conjures up Sauron fairly effectively (this was published in 1998, just a year after Harry Potter). But the fact that DWJ very cheekily calls one of her dwarves Galadriel (Derk wonders what his parents could have been thinking!) really makes it explicit. Plus, there is something that’s so small I’m not even sure it’s meant as a reference: at one point, Scales is referred to as “the great green dragon,” a phrase which began Tolkien’s interest in philology and the why of words and phrases. While it’s possible that Tolkien told this story in the lectures that DWJ attended at Oxford, it’s impossible to say that this is really meant as a reference, however much I want it to be.

Anyway, having been promised a Dark Lord, it’s something of a shock to open the book and find ourselves in the middle of a meeting of (for some of us) a sadly familiar type. The world where the story is set has been forced into a contract with Mr. Chesney, a nasty man who runs Pilgrim Parties from his own world and makes quite a bit of money from them. (His description is so wonderful and vivid–he looks almost normal until you realize his mouth is upside down.) Mr. Chesney and his minions are actually almost the only nasty people in this story. The whole conceit of it is that the Dark Lord and the Forces of Good are really just people who all live on this world and are forced to enact these rather silly battles for the benefit of tourists, at almost no benefit to themselves.

In fact, Derk himself, the eponymous Dark Lord, is a terrible Dark Lord. He’s a wizard who lives with his wife Mara (also a wizard) and their children, two human and five griffins, in a cheerful and ramshackle house. He likes animals and experimenting and he has no interest in the Pilgrim Parties or the world of wizards either. He’s not interested in power as such, and is much more a Radagast than a Gandalf (if we’re making Tolkien comparisons).

One of the things I found most interesting about this book, both when I first read it and now, is the way DWJ uses this human-griffin family to talk about the idea of families and who is in them. Outsiders often don’t recognize the griffins even as intelligent or people, let alone family. But for Derk and Blade and Shona, they’re just children/siblings. Ones with unusual powers and capabilities, maybe, but their place is not in question. For instance, at one point Blade thinks of Callette as his “more-or-less twin sister, who had hacked her way out of her egg while Blade was being born.” He has the familiarity of long and close relationship that can’t even see the other person clearly. On the other hand, there is some uncertainty throughout the book, as Derk is quite worried over the state of his marriage with Mara.

I had also forgotten how complex this one is; it’s in some ways a fun and funny story, but it also takes on some big questions. There’s a lot about personal responsibility and the use of power. Derk feels personally responsible for almost everything, including the mayor’s cows, while Mr. Chesney and the other nasty characters feel no personal responsibility whatsoever. It’s also interesting to note that there’s some quiet subversion going on with the female characters, who at a certain point organize themselves and go on strike. (Maybe also a prod at Tolkien?)

I also found the treatment of religion intriguing. Umru, the main religious figure, is treated quite sympathetically and his religious beliefs and experience are given both weight and seriousness. Without wanting to be too spoilery, the end also reaches for the kind of description and real understanding that I tend to associate with the Dalemark Quartet.

All in all, this is one I’m glad I revisited. It’s doing a number of neat things, often slyly poking fun at the works that came before it, and also giving a story that stands on its own (ie, it’s not simply satire). It’s worth noting that I did have a few uncomfortable moments, mostly when it came to the descriptions of the Emirates. As a whole, though, this is one of DWJ’s most thoughtful and complex books.

Book information: 1998, William Morrow; YA? adult? pov characters from both