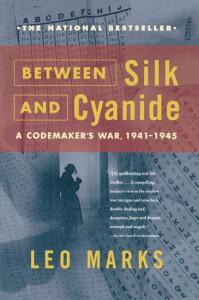 Between Silk and Cyanide was mentioned by a reader on my post about Noor Inayat Khan, since Marks worked with her and talks about her in his book. It’s a memoir of his time as a cryptographer and code-breaker for the SOE during World War II. Marks is an engaging writer, who I suspect could talk great piffle–his style actually reminded me a bit of Beverly Nichols. At the same time, he’s quite acutely aware of the realities of the struggle he’s engaged in. There were times I laughed, but other times that were completely heartbreaking (perhaps partly because I already knew a bit about some of the SOE agents and their fates–he talks quite a bit about both Noor and Violette Szabo who clearly both made strong impressions).

So this was an informative and interesting book, although I continue to not understand anything about codes. At the same time, I found myself wishing that I were reading it with a history of the SOE at hand, because it’s so much Marks’s story, filtered through his point of view. It’s a delightful, compelling point of view, certainly, and I found myself thinking about the apparent similarities between the creative writing process and the cryptographic one. And it’s not that I doubted Marks’s achievements, but rather that his experience is a bit, as he confesses a few times, insular. It’s not even a flaw as such, because it does exactly what it sets out to do: Leo Marks gives his experience in the SOE. All the same, I would like to balance it with an overview of the same time and situation.

As a side note, Marks was the son of one of the founders of Marks & Co., better known perhaps as 84 Charing Cross Road, and in fact centers a lot of his experience with and love for codes on the bookstore. It’s a source of income, of status (because so many of his superiors with whom he did battle were also customers), and inspiration.