The Iron Trial by Holly Black and Cassandra Clare 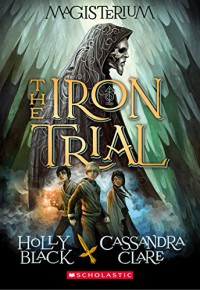 The Iron Trial, by Holly Black and Cassandra Clare, is a book that I found myself somewhat surprised and delighted by. On the surface, it looks quite a bit like the standard Young Hero Learns Magic and Finds Friendship and Enemies story. But it’s doing some interesting things with that story, in ways I wasn’t expecting.

The story starts off with one of those differences. Unlike most young heroes, Callum Hunt knows about magic and the existence of the mage’s school, the Magisterium. And he doesn’t want to go. His father has taught him that magic is dangerous, that the mages are cruel, using their students for experiments and not caring about their safety. But Callum has to go to the Iron Trials anyway, so he goes intending to make sure he doesn’t get in.

I also appreciated that Black and Clare have clearly made an effort to include diverse characters. Callum himself is disabled–his leg was shattered as a baby and he is permanently affected by this. There are students from several other minorities, including Tamara. I can’t speak to the accuracy or respectfulness of any of these portrayals, but it is refreshing to see a fantasy world that doesn’t default to white able-bodied kids. In fact, even Aaron who is sometimes set up as the stereotypical Hero, is also shown to be much more complicated than that.

Then there are some severely spoilery things that I can’t talk about, but which set up some intriguing questions about identity and family. I really want to know how these will be resolved, but we’ve got four more books to find out.

I did find that the story was oddly paced in a few places, especially towards the beginning. Oddly, given that I often like shorter books, I wished that a little more time had been spent on the details of magic and learning magic, to giving the texture of the world. And there were a few points where I really wished that the characters would just talk to each other–plots centering on characters keeping secrets when that doesn’t entirely make sense are not my favorite. On the other hand, I do think the characters were written in a way that attempted to help the reader understand why they might keep those secrets. And in thinking about young readers, I suspect this might not be as much of an issue as it is for me.

All in all, this is a book which is doing some fresh, interesting things that I appreciated a lot. I will definitely be reading the next one.